Charles Sekano: The geometry of fate 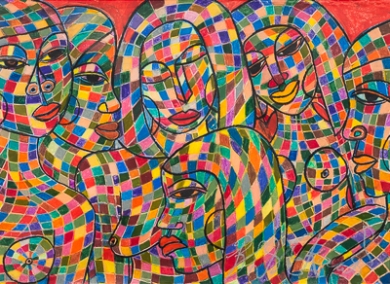 Charles Sekano ,The Geometry of Fate

This second exhibition of Charles Sekano’s work curated by Ed Cross Fine Art takes us on a journey of exploration, revealing vibrant images of women filled with an acute interest and sensitivity to emotions, moods as well as music and landscape.  The themes explored in Geometry of Fate revolve around women, music and nature. Women’s naked bodies and men smartly dressed in suits and hats seem to swirl around saxophones and pianos, bodies and musical instrument fusing in an harmony of shapes, with a classically jazz inspired nostalgia.  As we see in the works of fellow South African artists Peter Clarke and the late Gerard Sekoto amongst others, music and rhythm are celebrated both in the theme represented and in the choice of lines, visual cues and cadenced composition of the works. In Sekano’s case  the association with music runs very deep as he is both jazz pianist as well as poet and painter. Moreover most of the subjects of his works are drawn from the exotic if often harsh world of the Nairobi nightclubs in which he made his living for over thirty years.

Cohabitating with Jazz, a traditionally urban and nocturnal pleasure, nature and landscape strongly figure in the show, reflecting Sekano’s ties to the rich, wild and wondrous African landscape.  Women are portrayed walking, working or playing in fields of lush green grass at times filled with small burgeoning flowers against which the women’s silhouettes are offset.  Blue skies, foliage and trees form at once the foreground and background to the portrayal of sensuous women.

In the Geometry of Fate, colours are core to the palpability of the works.  Deep blues, greens, violet, burnt oranges, champagne, lemon and vivid fushia are deployed in a harmonious and delicate balance, soft hues merge with deeper denser tones.  Colours seem to play a vital role in fusing people and nature, in grounding the characters in their environment, in the here and now.  Shapes and colours fuse to turn the artist’s ideas, interests and emotions in remarkable visions of place and time.

With a fine balance between abstract geometric patterns and figurative style Sekano brings to the fore the soul behind his faces.  Noticeably, the men and women’s faces are strong and filled with life and emotions. The eyes are either closed, cast down, gazing away, pointing to a moment of self-reflection.  The many characters in his work serve as a tribute and testament to the diversity of people in Kenya and are at once daring and melancholic, strong and vulnerable.  The passion, fervor, sadness and pride on display call us to empathize with and to immerse ourselves in Sekano’s world. However, most arguably, his composition, colours and portaiture, whilst vividly drawing from African, convey universal values.

This exhibition brings together works from the artists time in Kenya (the 80’s and 90’s) together with new works post 2009 when the artist embarked on a new stylistic phase in which four-sided shapes assumed an increasing symbolic significance. His subjects remain female and are often strikingly beautiful but their forms are etched in to the paper with a series of geometric four-sided shapes that speak of another reality that coexists alongside natural beauty. The reality of life’s limitations – of benign human political structures that the artist has witnessed failing to materialize since his return to his home country as well as other structures, the grave included, that are inescapable.

Charles Sekano, now seventy years old, lives modestly in Pretoria. Despite having no studio and only limited funds for materials he continues to develop a prolific artistic practice and has a unique, if hitherto largely unacknowledged, place in the story of South African artists in exile. Due to the political turmoil of the 1950’s and the brutality of the apartheid regime of the time, Sekano’s family was scattered and he lived for thirty years in exile in Nairobi.  In turn this brought him a major position in the history of Kenyan art as he rose as one of the foremost painters in Nairobi in the eighties and nineties.

A self-taught artist, Sekano’s career started in earnest and gained serious international  recognition when he was taken on by Ruth Schaffner of Gallery Watatu in Nairobi. When Schaffner died in 1996, Sekano lost a significant actor ensuring his artistic visibility. It is in 2009 that Ed Cross located Sekano in South Africa and put on Seknao’s first exhibition in London: Charles Sekano: House of Women.   Last year Red Hill Gallery in Nairobi staged a retrospective of Sekano’s work and in November the artist’s work featured in Circle’s highly successful East African art auction in Nairobi.  Ed Cross Fine Art is today delighted to present Geometry of Fate and to once again bring Sekano’s beautiful, vibrant  and bitter-sweet  works to London audiences.

This entry was posted on 04/03/2014, 3:47 pm and is filed under Uncategorized. You can follow any responses to this entry through RSS 2.0. You can leave a response, or trackback from your own site.