Lovemore Kambudzi and Michael Soi – standing by their brushes 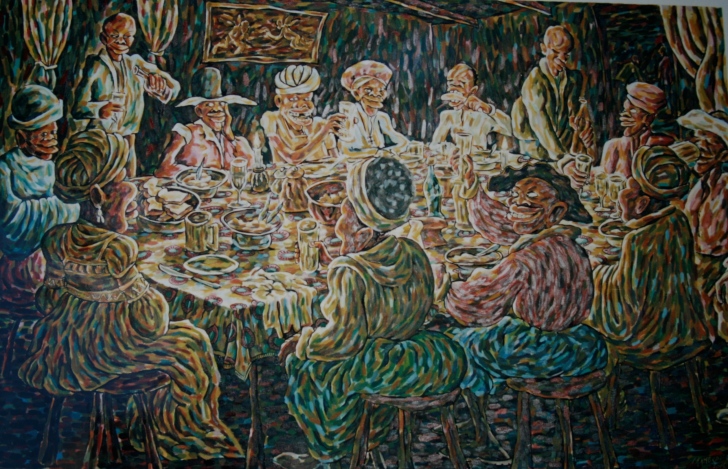 Zimbabwean painter Lovemore Kambudzi’s work – goes  to the heart of the debate about Western influences in African contemporary art and whether the more traditional (western) media still has relevance. This work is very loosely inspired  by Rembrandt’s famous Night Watch following  Harare’s Gallery Delta’s  workshop  held some years back. I love this painting with its almost imperceptible gear shift  from seventeenth century Holland to  21st century Harare. For me it symbolises a continent that will always surprise and defy the stereotypes that its burdened with. A continent where aspirations never die.

Zimbabwe has an interesting art history – two National Galleries created in colonial times  – the first Director of the National Gallery in Harare, Frank McEwen, still very much  respected in Zimbabwe, made it his life’s work to nurture  the artists of the Shona people in particular  whom,  he said, “have retained their mystical beliefs, profound in a magical world of ancestral and tribal spirits. …….. Today, the Shona artist, in between two worlds, the new and the old, feels a need for expression, and to mark his presence, in a new domain, relies on his rich mystical heritage. His inspirations come from the mythical religion and the symbolism of the elders, through meditation, dreams and dreaming “. It was ironic that McEwen had been living in Paris and was immersed in the work of Picasso, Matisse and others all of whom were  influenced so profoundly  by African “tribal art”. His approach was quite different to fellow  European  Margaret Trowell,  who established the art school at Makerere University in Uganda in 1939 and inspired generations of “cubist ” painters – Africans influenced by Europeans influenced by Africans .  McEwen wisely tried to short-circuit that sterile loop and attempted to facilitate the birth of a new African movement using traditional materials (stone) and traditional carving techniques – and inspired by “the symbolism of the elders” – in truth he didn’t need to do much apart from support the artists with studio space and sales. The further sad irony is that the movement that McEwen helped to create eventually deteriorated in  to  a largely commercial operation that “over-produced” and betrayed the values that had inspired it. It seems  that much of McEwen’s knowledge about the Shona people and their spiritual beliefs came from his close relationship with Thomas  Mukarobgwa, I came across this account of what happened:

“Sitting on the low foundations of the future National Gallery as it was being built, McEwen met Thomas Mukarobgwa, who talked to him about the Shona  tribe, their religion, their dance, and their music. Since the authorities insisted that all the staff of the gallery be ex-policeman, McEwen got Mukarobgwa in as a cleaner, and gave him, and his friends who followed him, drawing and painting materials. Thus an unofficial workshop was formed in the basement. After about a year, the vigorous “Afro-expressionism” of the paintings was spontaneously superseded by carving in local stone — from soft soapstone to hard serpentine and verdite.”  Extract courtesy of Fine Art America 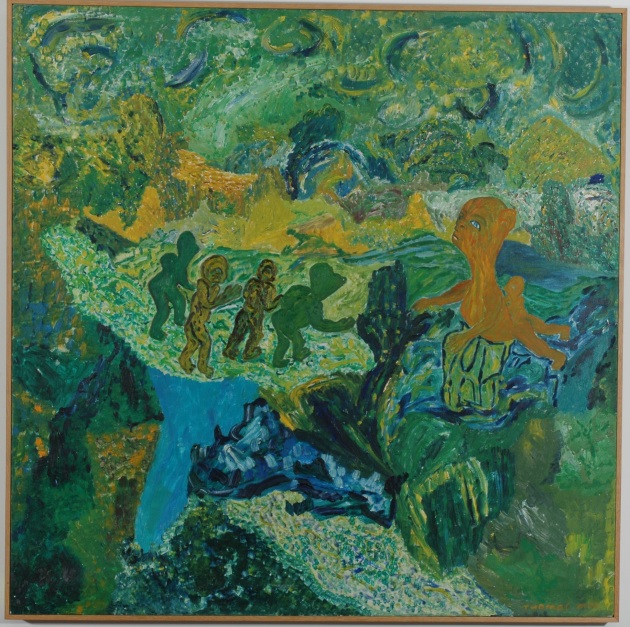 Mukarobgwa was an inspired colourist/expressionist painter  who painted his dreams and visions – I heard from one source that he rejected painting on canvas in the end for ideological reasons favouring the traditional African medium of  sculpture.

So what are we to make of Kambudzi – the “Shona artist” who  has remained utterly faithful to the Western medium of canvas and oil paints even  inspired by Western masters from time to time, painting   intensely “local”  paintings  and who has been described as the African Breughel in the same way that Michael Soi from Kenya  has been referred to as an African Hogarth? Both artists are popular in their own countries (in so far as contemporary art is taken seriously by the general public in Zimbabwe and Kenya – countries lacking the massive influencing power of a Tate Modern or a MOMA) – Soi has led a crusade in Kenya to get people interested in art – his quasi  children’s book style is no accident – some of his biggest fans are children,”get them young” , he figures. Neither artists are in the cool school of international curation but their works are steadily gaining recognition locally and abroad and both live by their painting – unaided by grants or teaching jobs.

But painters are under threat. In a multi-dimensional world the convention of applying paint to canvas can seem limiting or even passe in a global culture whose  language is  appropriation and contextualisation. The new art elites emerging across Africa must be careful not to marginalise the men and women of the brush. For people are drawn to paintings despite the triumphs of photography  probably because they recognise in them that primeval language of communication which by dint of  its hand movements is a metaphor for life itself .

The missing ingredient in East Africa certainly has been all to often  an absence of  pertinent critiquing and curation. Simon Njami and his “Amnesia” group were right – Africans need to curate themselves and are increasingly doing so.  And one of the most positive things that has come out of  this  “intervention” is the emergence of more local curators.

Ramoma (Rahimtulla Museumof Modern Art)  – formerly the biggest gallery in Nairobi collapsed  in 2010 in a veritable cauldron of bad feeling. It was founded with excellent intentions and the palatial  new building that was to be its downfall, was born out of a very generous donation. The new premises and what came with them was, in hindsight, misconceived. You could say the whole thing was too “top down” – the really sustainable stuff must come and is coming from the artists themselves and outside support – like all aid in Africa – must be seen as the double-edged sword that it is. Good leadership is what will solve Africa’s problems and leaders are emerging within the community of artists – and it is indeed  a  community. I was moved to hear that when the respected artist Richard Kimathi found some fame and fortune early on his career he would dash some of his artist colleagues  500 shillings each every time he sold a painting – “it kept a lot of us going in paint and brushes” an artist told me. That’s community and that’s my experience of the best of Africa in general.

I am convinced that as far as Kenya is concerned we need to see the emergence of two things: firstly a meaningful and competent art school and secondly an effective art museum where contemporary art from Kenya and other African countries and can be seen by the country’s artists and general public. In a conversation I had recently with Nike Jonah of the U.K.’s Arts Council the importance of “the archive” came through as one of the vital ingredients to promote real development in the art  sector. As an ex-publisher I found it ironic to hear Bisi Silva of CCA, Lagos declare that it was the library that was the most vital  her centre. 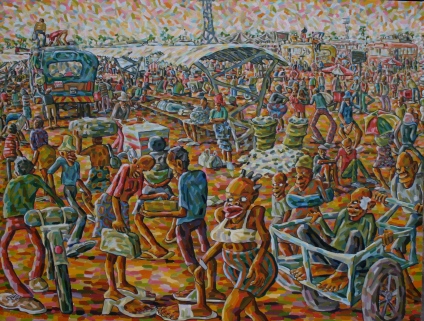 In this  fine painting Kambudzi celebrates the existence of  Mbare Bus Terminus. Why do these paintings of Harare life appeal?  One of the reasons is the sense of pride in the  place and its people  – the often motley and frequently impoverished survivors of the Mugabe regime are drawn with shrewd humour – the woman happy in the knowledge she has a body worth flaunting, the little boy echoing the furtive look of his mother, the dazed patient calm in the knowledge that help, however basic, has been granted him, the porter stoic and grim-faced; the woman with a suitcase on her head intent only on catching the bus. Nothing misses Kambudzi.

The artist’s version of pointillism is no accidental borrowing from European painting, it probably has more to do with cloth and the weaving of threads than anything else as in Africa fabrics are key culturally. It also  manages to  represent on canvas  what I for one experience in Africa –  a much greater sense of interrelation and connectedness than one generally feels elsewhere. And the vibrancy of colour and smell and sound and taste that you find on the continent – somehow this modified Seurat and Van Gogh  style perfectly recreates that rich “soupy” feeling. And then of course there is the humour which is everywhere in Africa – still alive in even  some of the worst situations. 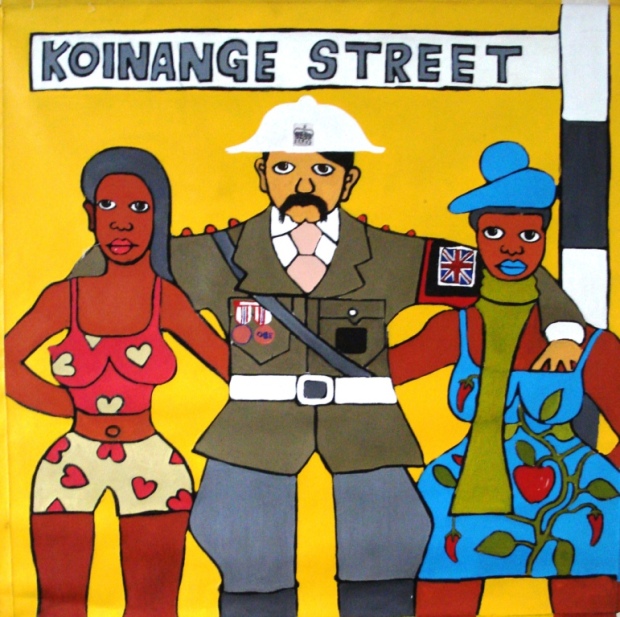 Whereas Kambudzi has been likened to Breughel Michael Soi from Nairobi has been dubbed its Hogarth. Like Kambudzi he has a fierce work ethic, his works relentlessly targeting hypocrisy and greed. From venal priests to leering politicians, his paintings  respond to  the big issues of the day – including political impunity and the expanding sex industry and  a compromised police force. But again,  like Kambudzi, his vision is  not only critical or negative, his working women series, for example pays homage to a new generation of confident, beautiful and  savvy Kenyan women competing with men in all the professions.